Ulavi Basaveshwara Gudi is situated on a hillock. This shrine's history goes back to 12th century i.e. Basavaeshwara's time. Back then the  was known as Basappana Gudda, it is said that a shrine existed here since then. The hill gained importance when Basaveshwara's sister Nagalambike and her son Chennabasaveshwara camp here during their journey from Kalyana (in Bidar district) to Ulavi (in Uttara Kannada jungles).

Here are few events from Nagalambike and Chennabasaveshwara's journey:
Sharanas in a bid to escape Bijjala's persecution leave Kalyana en mass; Bijjala's soldiers chase the Sharana's group with an intention to finish them off; the Sharanas are followed from Kalyana to Kadrolli (between Belgaum and Dharwad); Sharanas and Bijjala's soldiers clash at Kadrolli (on the banks for river Malaprabha); Sharanas win the battle and Bijjala's soldiers turn back. Sharanas form two groups, each lead by Channabasaveshwara and Dohara Kakkayya and take two different routes to Ulavi. Dohara Kakkayya and his wife Bhistadevi injured during the battle die near Alnavar, that place is known as Kakkeri. Even to this day, a fair called Bhistadevi Jatre happens every year at Kakkeri. Gangambike attains aikya near Itgi, on the banks of river Malaprabha. Channabasaveshwara's group (Nagalambike is part of this group) arrive at Dharwad and camp at Basappana Gudda (present day Ulavi Basaveshwara Hill); the group celebrates the battle victory; during the stay Channabasaveshwara and Nagalambike advice nearby village people to develop Basappana Gudda shrine; the group proceeds to Unkal (near Hubli) and then to Yellapur. Kakkaya's group also arrives at Yellapur; having regrouped they cross Kali river and reach Ulavi. Nagalambike continues to travel south with her journey ending at Yennehole at Tarikere (near Bhadravathi).

Coming back to the temple..
A peaceful temple; it's silent here most times. The temple shikhara is 8-sided with each of the sides dedicated to a Shivasharana. You can see statues of Allamaprabhu, Chennabasaveshwara, Akkamahadevi, Siddalingeshwara, Jagadguru Renukacharya, Siddrameshwara, Neelambikedevi and Basaveshwara. 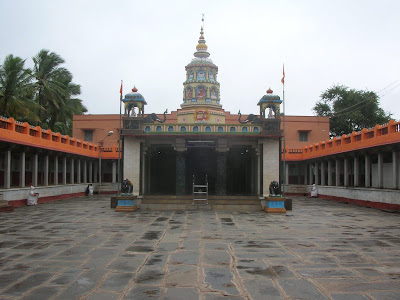 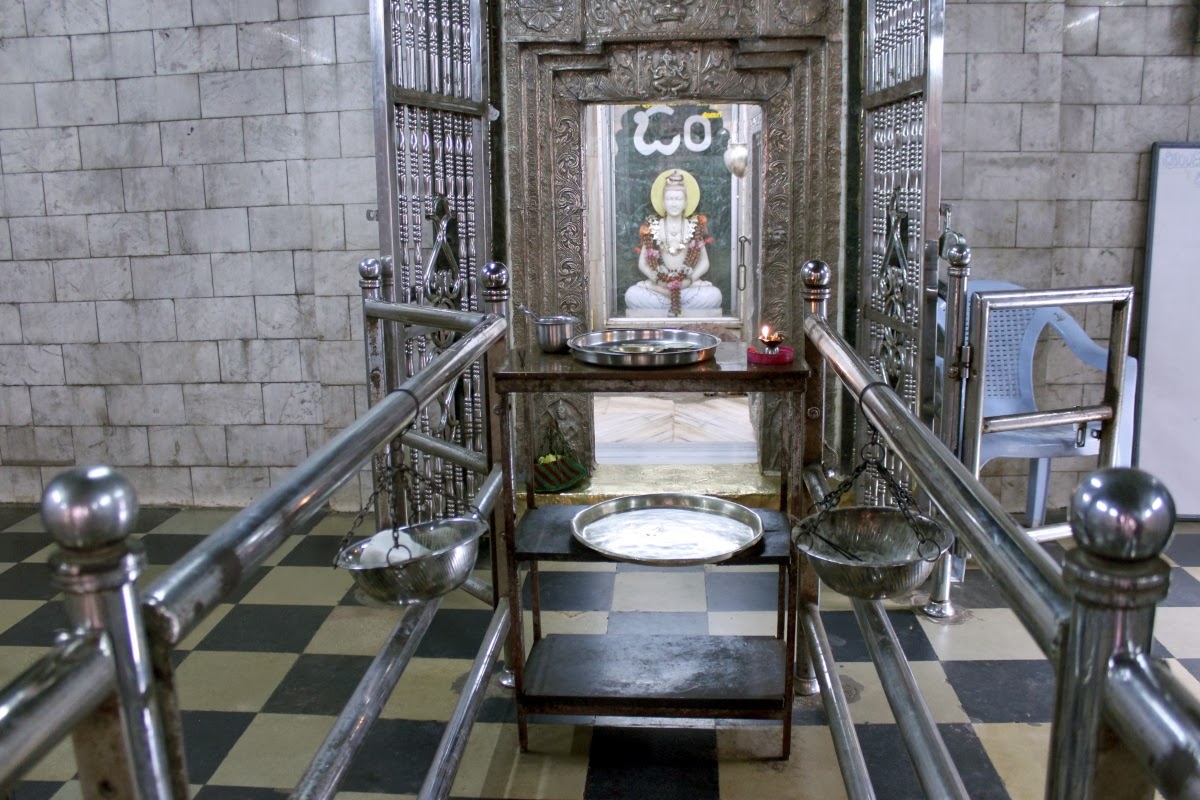 In the Garbhagudi is a marble statue of meditating Shankara. 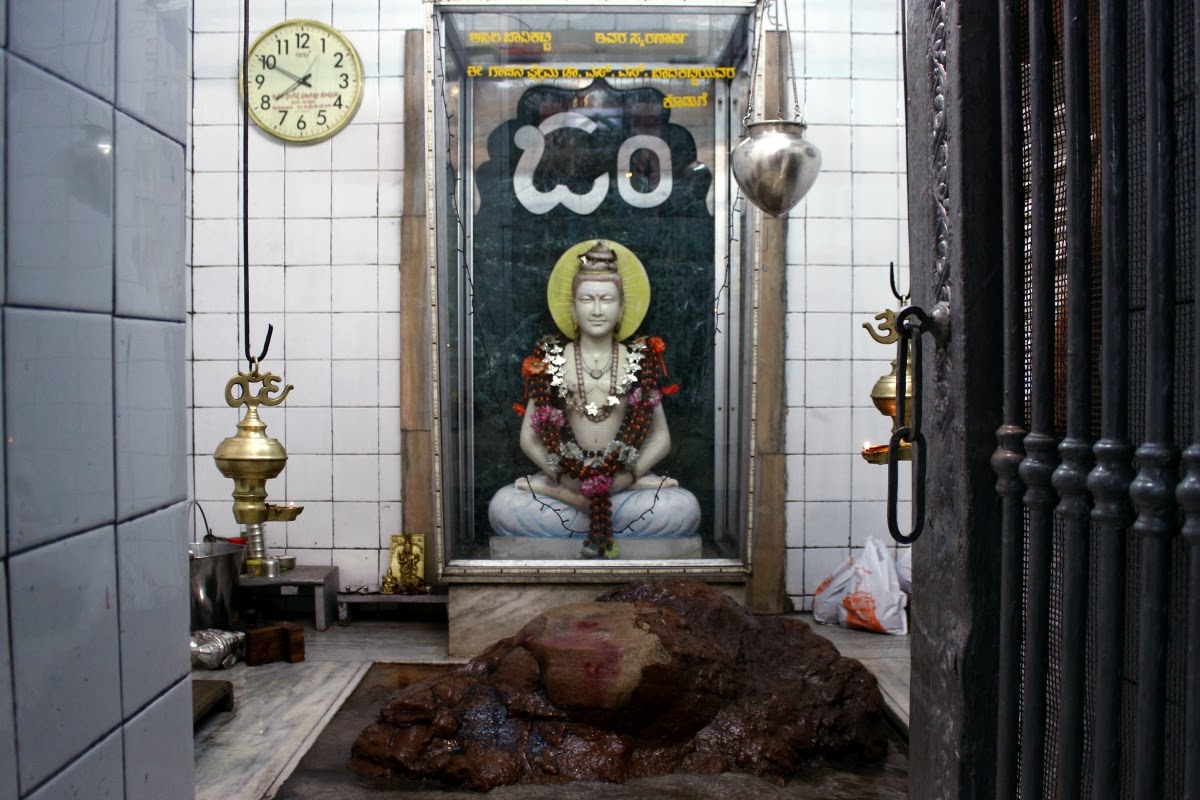 It is said that Monday is Lord Shiva's day. Monday mornings on my way to office, I stop here for a minute to pray. It would be good way to start the week with Lord Shiva's blessings. 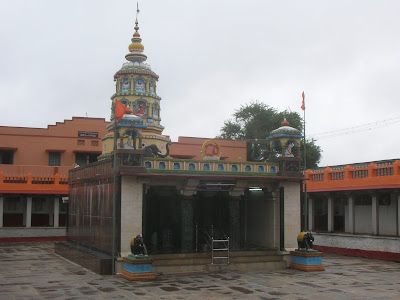 This temple seems to be an old one. Going back to the days when walking, bullock carts and horses were the only modes of transportation, traveling pilgrims would live under this shelter. They would spend few days and then move on to another temple. 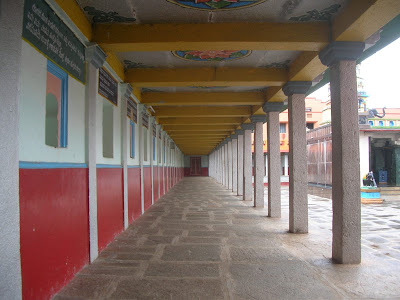 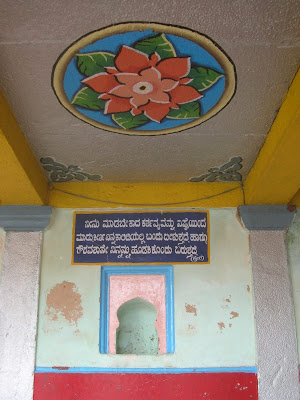 The temple is well maintained and who ever is in charge takes real good care. This temple has four elephants- two big ones outside at the entrance and two small ones at the inner temple entrance. This particular elephant looks as though it's angry... 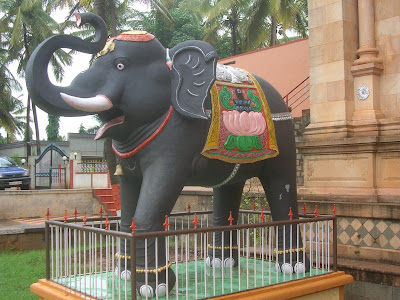 Statue of Shivasharane Akka Nagalambike, sister of Basavanna and mother of Channabasaveshwara. She was well known as Akkanagamma. 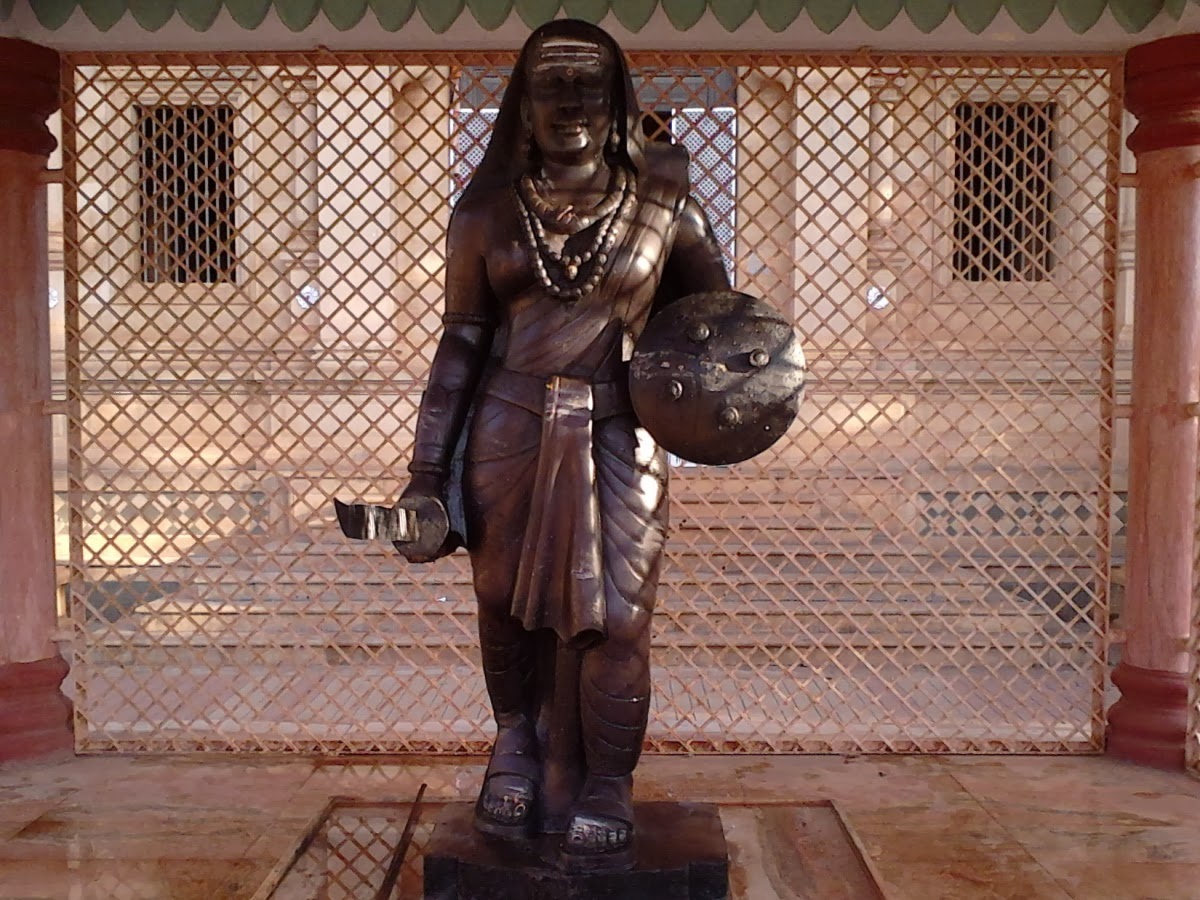 This is a Bilva Patri tree. It is said that Lord Shiva likes Bilva Patri leaves and it's quite common to see at least one tree in every Shiva temple's premises. 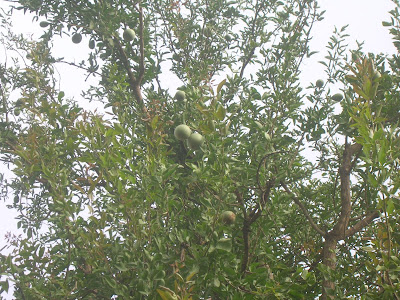 There's also an ancient mango tree, two or three tamarind trees and plenty of coconut trees. And I'll mention about birds which live amongst these trees. If you are a resident of Dharwad and not been here, do make it a point to see this temple. You'll like it.

A short walk from the temple are two ancient artifacts- 1. pair of feet embossed in stone in mark of Channabasaveshwara's visit to this place and 2. a hero stone in memory of the battle between Sharanas and Bijjala's soldiers..
.........
Posted by siddeshwar at 1:08 AM

I have seen many temples where there will be linga and nay be Vinayaka statue, may be shakti statue like in Srisalam temple.
But this is a rare temple where you can see maasti stone,veeragallu,beautiful linga,SriBasavana statute, and other sharanas statues and also Sri Jagatguru Renukacharya statue. Nowadays devotees quarrel that Basavanna started Lingayath dharma,but here Sri Renukacharya statue is also there.There was no difference then between Basavanna and Sri Renuka Guru

Very informative, Contact phone numbers to tha temple office would be of help to the public I feel